Lock in your 2022 price before the end of the year by enrolling now on our upcoming Certification Programs!Enrol Today!
3
3

Why AQ Is So Much Bigger Than The Workplace

Earlier this year, the BBC published a series of articles on the 101 ways worklife is changing today. One of the most interesting articles, by Lisa Leong, discussed adaptability quotient, and its importance in the modern workplace. In fact, Leong went so far as to describe AQ as the ‘X-factor for career success.’ 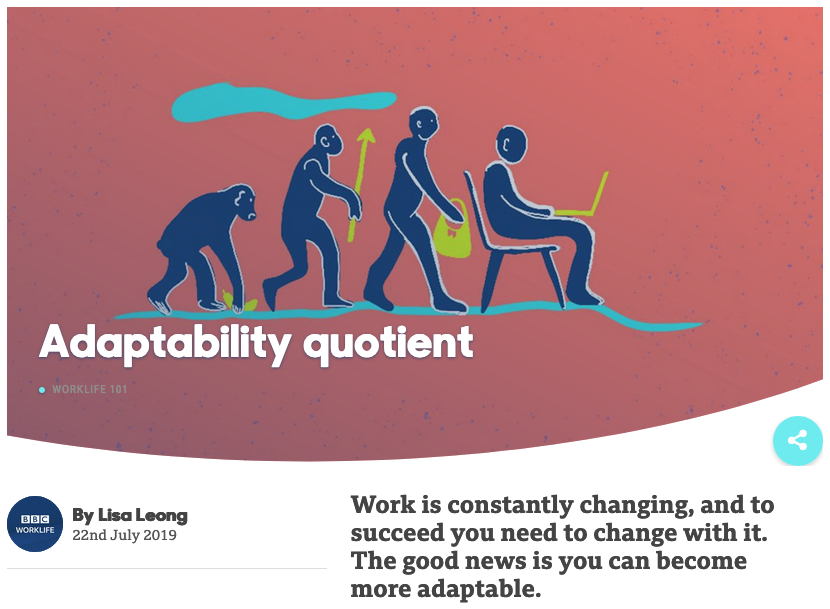 The world is waking up to AQ, but there are still many different opinions on what it is, how it can be measured, and the best ways to improve it — because one of the things all the experts seem to agree on is that it can be improved, which is, as Leong puts it, ‘good news’!

The article in question provides, in my view, a limited model of adaptability quotient in the form of Theory U by Otto Scharmer, from the Massachusetts Institute of Technology. Scharmer suggests

‘three elements can help provide a framework: keeping an open mind, so you see the world with fresh eyes and remain open to possibilities; keeping an open heart, so you can try to see any situation through another person’s eyes; and keeping an open will, letting go of identity and ego to sit with the discomfort of the unknown’.

Whilst I like this 3-tier model (open mind, open heart, open will) as a starting point, it doesn’t take into account other potential measures of adaptability, such as our ability to bounce back from setbacks (essential if our methodologies are constantly being invalidated by new data or technology) or the way in which we might shift our thinking, which will surely be unique to each person. If we look at Adaptai, who have created a holistic measuring tool of adaptability, there is a more complex and comprehensive understanding. Scharmer’s model really corresponds with what Adaptai term the Flexibility and Learning Drive dimensions of adaptability, two out of four key dimensions.

This is some text inside of a div block.

In Adaptai’s model, evidence-based on years of research and reviews of hundreds of studies, there are three overarching dimensions of AQ Ability, AQ Character, and AQ Environment which all influence our adaptability. It is the interplay of our learned adaptability skills (AQ Ability), our innate personality (AQ Character) which is somewhat fixed, and the environments around us — particularly at work — that might be helping or hindering our adaptability (AQ Environment). It goes to show that even with the best adaptability skills in the world, in an environment that prohibits experimentation, innovation, and learning, adapting becomes much harder.

Within AQ Ability, which is the learned adaption muscle, there are four key sub-dimensions, one of which is Flexibility. Flexibility is defined as: ‘the quality of bending easily without breaking’. It is our ability to pivot from one idea to another, to change our solutions in order to solve problems, and to flit between one mindset or type of work and another effortlessly. To use a quote I have referenced before by F. Scott Fitzgerald, the writer of The Great Gatsby:

‘The test of a first-rate intelligence is the ability to hold two opposed ideas in mind at the same time and still retain the ability to function.’ I would align this with ‘open mind’.

It is also our ability to see things from other people’s perspectives (open heart), which allows us to consider a broader spectrum of ideas and potential solutions. Flexibility is not only intellectual, but also emotional and empathetic, allowing us to think like another and perhaps understand their position. 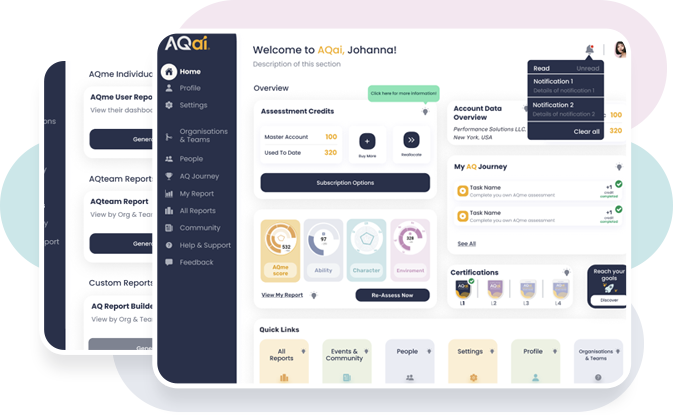 Open will, defined by Scharmer as: ‘keeping an open will, letting go of identity and ego to sit with the discomfort of the unknown’ is intriguing. It has almost Buddhist connotations of removing the ego. Letting go of the processes or techniques that we believe define us, and embracing new processes. Becoming attached to the problem, and not the solution. If we want to solve world hunger, it shouldn’t matter how it is done (unless, of course, we are speaking about unethical practice, which would be a different story) — the end goal is the important part.

Whilst open mind and open heart seem to correspond with Flexibility, I believe that what Scharmer has described with ‘open will’ corresponds with Learning Drive, another key sub-dimension of AQ Ability. Learning Drive encompasses our thirst for knowledge, our willingness to constantly explore new processes or align our practices with the latest research, but it is also our ability to Unlearn and discard old data. In other words, our ability to let go of what is no longer useful.

Whilst Flexibility and Learning Drive together form an interesting picture of adaptability, I do not believe they tell the whole story.

Alongside Flexibility and Learning Drive, we also have Resilience, our ability to recover from setbacks. And Mindset, our self-belief and determination. Mindset also ties in with Carol Dweck’s research: do we have a fixed mindset or a growth mindset? Do we believe we cannot change ourselves, that the world will always be the same, or do we believe that with effort we can change anything about ourselves or even the world around us? One of my favourite quotes from George Bernad Shaw is:

For more information on the four sub-dimensions of AQ Ability, there is an in-depth look at what they mean and how they function here. However, we can easily see that AQ is more nuanced and complex than simply our ability to unlearn and our mental and emotional flexibility.

Leong asks the question of whether in the future we will be asked to demonstrate AQ in job interviews, and I believe we will. Not only was it described as Harvard Business Review as ‘the new competitive advantage’, and amongst the top five soft skills that employers were looking for in new candidates, as determined by 2018 LinkedIn data, but historically AQ has always been vital for human innovation and survival. We just didn’t have a name for it yet. However, arguably, AQ has become more important than ever because the pace of change is faster than ever before. I would also argue that because of the interconnectedness of the modern world, the scale of change is bigger too. Millions of jobs are at risk because of AI, as well as to be created, exponential technology, and the yoyoing economy. Billions of jobs will potentially need to be tweaked or ‘re-skilled’ by 2030.

Leong points out that the shift is already happening: ‘[In] the selection criteria for the Mars One space programme. Adaptability is one of the five essential attributes for astronaut candidates.’ Space is perhaps the most hostile environment for humankind. Yet, as Arthur C. Clarke once predicted in his early short story ‘Rescue Party’, our future may well lie with the stars. If we are ever going to get there, we will not only need to be adaptable in response to dangers and unforeseen environmental hazards, but also in the infrastructure of our civilisation. Why do I mention this specifically? Well, AQ is important for the workplace, of that there is very little doubt. But it is also important for our species and planet.

There is a bigger picture here, and a more significant role AQ may well play not only in our future as individuals, teams, and organisations, but as the human race. The United Nations SDG (Sustainable Development Goals) highlight perfectly the period of crisis we are about to enter in regard to our environment (AQ Environment on a global scale!). The 17 goals address the world’s problems (I think of them as the to do list for the planet): from hunger and starvation to the depletion of animal life on land and in the oceans. Many businesses and governments are turning their hand to these goals, and I believe they are a rallying point for all of us to attack the global problems head on — and collaboratively.

Earth is resilient. As David Attenborough’s documentary Our Planet highlights, Mother Nature has remarkable abilities to recover if given the opportunity. Near-extinct whale species miraculously regenerated within a period of merely 10 years. Shark numbers in certain areas of the world have bloomed after a ban on hunting them. That is saying nothing of our own technological efforts to resurrect lost species (otherwise known as de-extinction biology). As dire as things look, and as tempting as it may be to succumb to an attitude of ‘It’s already too late’, I believe, the reality is that it isn’t too late, and the world can still flourish. And us with it.

In terms of human society, there is already abundance to be found in many areas of the world, but the distribution of that abundance is skewed. Inequality, along with human bias and prejudice, is what creates much of the suffering on our planet. From this perspective, we could well learn from machines.

We are surrounded by people and organisations innovating and making great leaps toward resolving the crises caused by wasteful activity and excessive consumption, but the message has not reached everyone yet (and dare I say it, some do not want to be reached). Unless we radically overhaul our way of life and embrace a mindset of adaption with open minds, open hearts and open will, there may not be a way of life left to save.

This is some text inside of a div block.